MYSTERIOUS MASTERPIECE is a documentary film about one of the most remarkable, controversial and mysterious painters in Dutch history: the 17th-century Dutch painter Johannes Torrentius.

An unlikely story about an inimitable painter, libertine and free thinker, who was imprisoned in Haarlem, nearly burned at the stake for heresy, and was rescued from prison by the Dutch Royal House and the English King. Only one painting has survived and still puzzles experts. In MYSTERIOUS MASTERPIECE, the case is reopened.

Maarten de Kroon (…) has set up his documentary as an art thriller, in which every time an attempt is made to solve the mystery surrounding the painting.

Mysterious masterpiece is contagious: the viewer also starts to wonder how this painting could have come about. The film is cleverly composed and has a great cast.

But even the shadow of the painter offers enough material for an exciting film. De Kroon, in turn, does not overplay its hand with too firm conclusions, but offers the viewer plenty of opportunity to puzzle along in its art-historical detective.

One of the most amazing stories in the history of art

MYSTERIOUS MASTERPIECE is a documentary film by Maarten de Kroon, made in cooperation with Jeanne van der Horst.

In MYSTERIOUS MASTERPIECE Maarten de Kroon, one of the makers of the international award-winning documentary film DUTCH LIGHT, investigates the incredible case of the 17th century Dutch painter known as Johannes Torrentius, born Johannes Symonsz. van der Beeck (1589-1644). A hallucinating film about a libertine and genius painter, toleration and torture and one mysterious painting.

It is an explosive cocktail of unique craftsmanship combined with a libertine life, sex and heresy, tolerance in 17th century Holland (or maybe the lack of it), pushing the limits, torture and punishment. What remains is an incredible story and one unique painting, now part of the collection of the Rijksmuseum, that is a mystery because the medium the painter used was never discovered.

Johannes Torrentius became a wealthy and famous painter. He moved from Amsterdam to Haarlem and was, according to Constantijn Huygens, the best still life painter of his time. He sold his work to the rich and famous, and lived the life of a libertine, dressed like a dandy, made jokes about religion, heaven and hell. He was jailed in 1627 and put under brutal torture by order of the courts of the City of Haarlem. He was accused of many things: awful blasphemy, heresy, satanic beliefs…

He was almost convicted to burning on the stake, and finally condemned to a 20 year prison sentence during a much discussed show trial. Diplomatic pressure applied by none less than the ruling King of England, Charles I, one of the richest art-collectors of his time, and the Prince of Orange, got Torrentius released. He left for London in 1630 and from that moment on vanished into thin air. He died and was buried in Amsterdam, in 1644.

In the end: all his works were either lost, destroyed in Haarlem or sold and disappeared after the brutal death of Charles I. Only one piece survived, and was discovered by pure chance in 1913. The painting, a wooden circular panel, was used for a long time as lid on a raisin barrel in a grocery shop in Enschede, a town in Holland. Nowadays it is part of the collection of the Rijksmuseum. And even after extensive research of his Still life with a bridle, it is not known yet how exactly Torrentius made his painting.

In the documentary film MYSTERIOUS MASTERPIECE the filmmakers re-open the case. What is known, what will new extensive research done by the Rijksmuseum show? What medium did Torrentius use? No traces of oil, no traces of a brush – as if one is looking at a 17th century photograph. Did he or did he not use a camera obscure, and if so: how did he work with it? Did all of his work but his still life disappear? Will we be able to find any lost paintings? Did Torrentius really stay for so long in London?

And what about tolerant Holland in the 17th century? What about his ties with the Rosicrucians? An international team of witness specialists will be consulted to het closer to Torrentius’ mysteries.

Order your copy on dvd ntsC

To order, please pay the amount of € 22,50 to bankaccount NL49 ASNB 0708 9534 92, M.B. de Kroon, mention DVD Mysterious Masterpiece and your address and we will send you the DVD as soon as your payment has arrived.

For international ordering: please send an email to post@maartendekroon.nl and we will provide you with all information, costs of shipping, how to pay and receive your personal copy.

You can also find the DVD on the DutchLightFilms webshop and pay & order directly, and combine for instance with the documentary film Dutch Light. 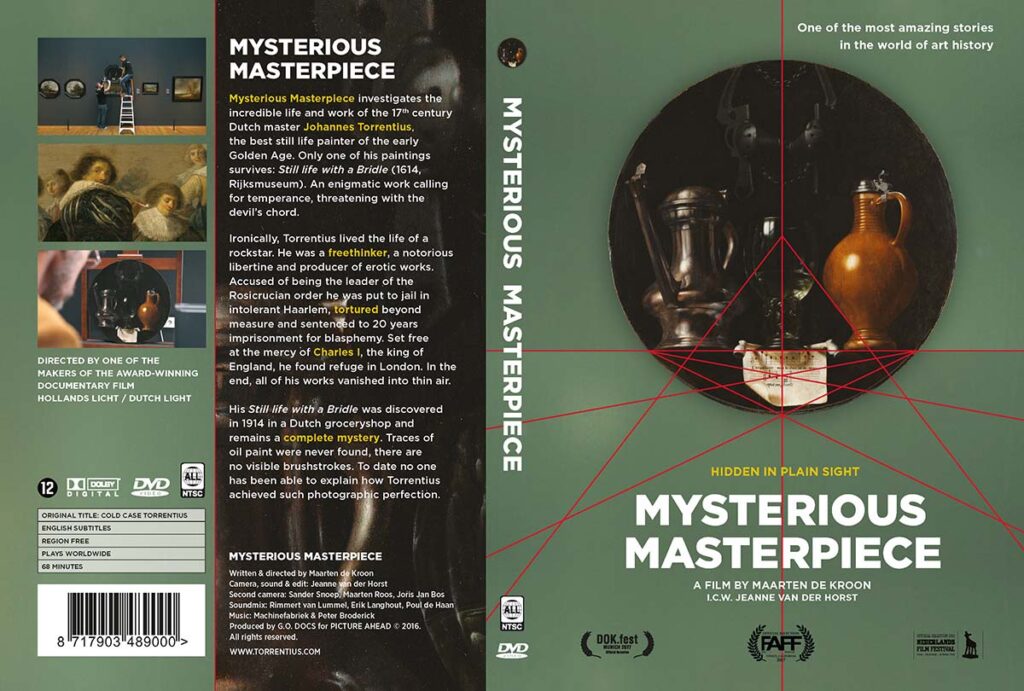